How to Talk to Little Kids about Sexual Abuse

The thing I remember most about that night, is that it was perfect: it was dusk and a salty breeze had just started to chill the air.  I was six and we were on vacation in Mombasa on our way to see the acrobats.  A funny memory popped into my head for no apparent reason and I giggled.

“What’s so funny?” asked my mom, who was walking beside me.

So I told her the strange little story about me and the schoolteacher who lived down the hill from our house.  I told her how I’d seen him in the shower, and how he told me about his private parts and asked me about mine.

Somehow, in the way that her expression froze, or the glance she shared with my dad, or the barrage of questions that followed, or the fact that no one laughed, I realized that my strange little story was not okay.  I got an anxious, guilty feeling in the pit of my stomach, so I stopped talking and didn’t tell that story again for over twenty years.

I was lucky. I wasn’t physically hurt or left with emotional scars. But to this day, every time I remember that brief encounter I’m filled with shame and I push the thought away. When I think of how much stronger this feeling must be for those who weren’t as lucky as I was, it’s easy to see why sexual abuse is still such a taboo subject.

I’m writing about this now, because it has shaped the way I approach the subject with my children.  April is Child Abuse Prevention and Sexual Assault Awareness Month, and I want to share how I talk to my kids about sexual abuse, and hear how you talk to yours.  *I’m not an expert, so I welcome any advice or feedback.* 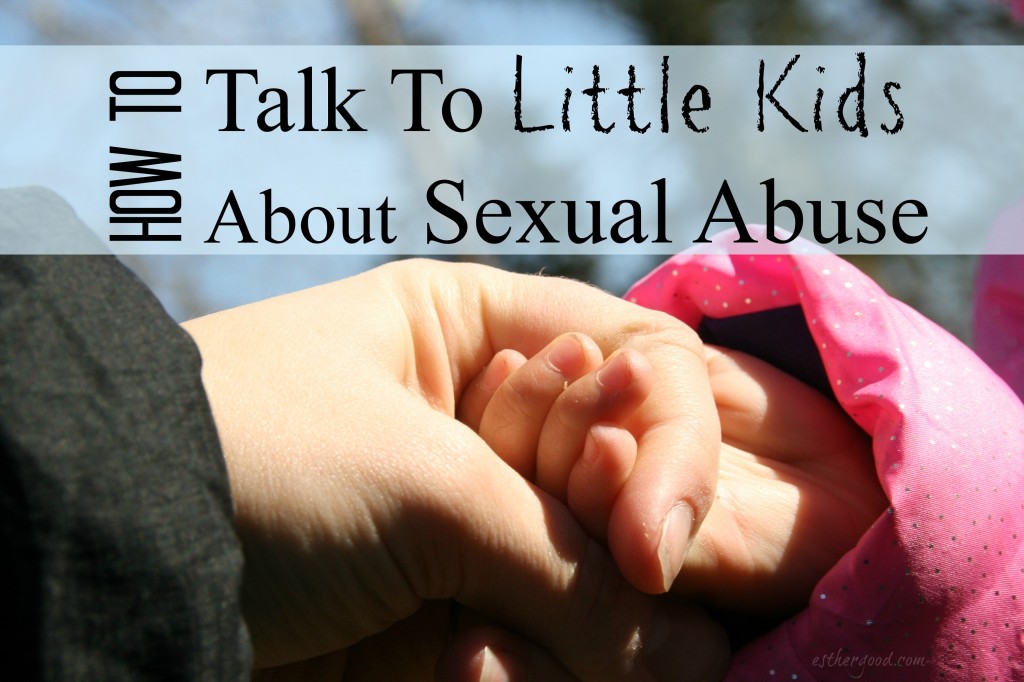 If you suspect your child is being sexually abused, get help.  You can call the National Sexual Assault Hotline at 1-800-656-HOPE (4673), or visit the online hotline at online.rainn.org.

1. Start Now: My story happened when I was six, and by the time I was seven I had already started hearing information about sex from my friends (they called it mating). Some of them who were younger than I was had already been molested. I look at my kids who are two and four, and I want to believe that they are too young to have to know about this, but history tells us otherwise.  If your children are old enough to understand you when you talk, it’s time to start the conversation.

2. Stay Calm: Sexual abuse is a terrible thing.  This is a serious topic and I want my kids to know I’m serious when I talk about it.  At the same time, I don’t want any anxiety I might have to rub off on them.  I try to find a balance. If Nati starts joking around while I’m talking to him, I smile, but gently redirect him to the conversation.  I keep it casual and bring it up when he’s on the potty, in the bath, or getting ready for bed.   It’s not a long, drawn out talk every time, but just a reminder here or there, or a questions to see what he remembers.

3. Teach Boundaries: There are two parts to teaching kids about boundaries. The first part is teaching them what is and is not appropriate.  I explain to Nati that no one else is allowed to see or touch his private parts and he is not allowed to see or touch anyone else’s private parts.  I tell him that if anyone tries to see or touch his private parts, he should say no.  The second part is something my sister Rebekah shared with me after hearing a talk about sexual abuse prevention: teach them that they do not have to give or receive physical contact that they don’t want.  This means that I need to affirm my kids’ choice to say no to a goodnight kiss, or to refuse to hug relatives, etc.  Obviously this can be frustrating and uncomfortable at times, and I do find myself having conversations with Nati about being polite and considering other people’s feelings.  But in the end, I need to reinforce that he is never obligated to give physical affection to people, and he has the choice to refuse contact that he doesn’t want.

4. Teach Anatomy: This is important because it gives children the vocabulary they need to tell you if they have been abused.  It can also be a preventative measure.  Sexual predators tend to be  wary of kids who use correct terms for anatomy, because it increases the chances that someone will find out. This is another tip that my sister shared with me, and it was a hard one for me to accept. I grew up with three sisters and no brothers, and I blame this for the fact that I find the word “penis” distasteful. (And now I’ve said it on my blog!)  But I have a son, and he has a penis. When he was little, we called it his pee-pee, but when I learned that using correct anatomical terms could help protect him, I started saying “penis.”  He still says “pee-pee” sometimes, so I just ask him what else his pee-pee is called to make sure he’s comfortable using the term “penis.”  He also knows the names for his testicles and anus, and when he sees me change Lily’s diaper, I explain to him that she has a vulva and a vagina instead of a penis.

8. Repeat: This is a lot of information to cover, especially for little kids.  We usually only talk about one or two things at a time, and only for a minute or so, but I bring it up often.  As he gets older and has a better long-term memory, I’ll probably gradually decrease the frequency.  For now, I try to bring it up often enough that he won’t forget what we talked about in between.

As I said before, I am not an expert. If you have a different or better suggestion for any of these steps, please leave a comment.  I would love to hear how you approach this topic with your children.