I have nothing new to say about the deaths of Michael Brown or Eric Garner that hasn’t already cycled through your newsfeed a dozen times.  But I’ve seen a lot of push-back about “race-bating” and “playing the race card”.  Some people want to know why these two cases have garnered such a firestorm of media attention and popular protest when there are plenty of cases of unarmed white people being killed by police and of white people being killed by black people, and I think that deserves a response. 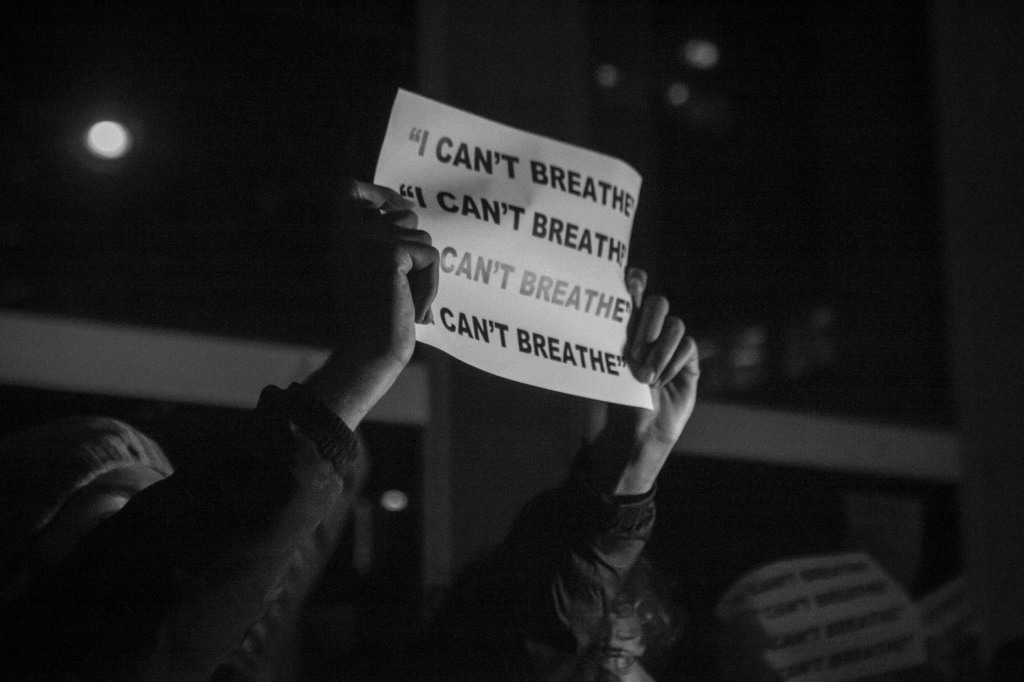 Let me start by saying that there are at least two distinct, though inextricably connected, issues involved in both of these cases.

The first is the problem of police use of force.  (When is it legal? When is it justified?)  I absolutely believe that most law enforcement personnel choose their vocation because they want to help people.  I understand that it can be a difficult and thankless job, and that these men and women are forced to make quick decisions in the heat of the moment.  I understand that people make mistakes.

However, the Fifth Amendment states that “No person shall…be deprived of life, liberty, or property, without due process of law.”  Neither Michael Brown nor Eric Garner were afforded due process of law before being deprived of life.  Part of the outrage in each of these cases is due to a feelings of betrayal when police face no consequences for  killing the civilians they have sworn to protect.  Some have suggested that penalizing officers for decisions that were made in the heat of the moment might cause officers to second guess themselves, further putting them in harms way. But a study of the affects of police body cameras has suggested just the opposite: increased accountability for officers is safer for everyone, correlating to a 60% decline in police use of force and an 88% decline in complaints against police, compared to the previous year.

As we have just seen, video evidence of an incident is not a guarantee that law enforcement will be held legally accountable for their actions. And if we set a precedent where the use of body cameras does not actually lead to police being held accountable for their actions, I think it’s a fair prediction that we’ll see a decline in the benefits of body camera use as well.  This is not a “race issue”, and it is an important issue for everyone in our country to think about because #AllLivesMatter .

The second problem in these two cases is that of systemic racism. (Is our law enforcement, legal system, and society as a whole  skewed against people of color?)  Racism is an ugly word, and not one that any of us likes to be associated with. As a white person, I understand that it’s easy to feel defensive when that word gets tossed around.  I don’t want to be tied to our nation’s history of racism just because of the color of my skin. But regardless of your own personal feelings about racial equality, or your best intentions to see and treat everyone equally, the world does not treat us all the same.

When I spent a semester living in Washington D.C., I was told to “follow my instincts”.  Any time I felt uncomfortable or in danger, I should find a busy, well-lit place, or call someone, or both.  The truth is that most times when I saw a group of  young men loitering beside the street where I was walking, I felt uncomfortable.  Did it make a difference if it was a group of brown men in hoodies or a group of preppy white boys in polo shirts? I can’t give you any statistics, but probably.  That’s not because preppy white boys don’t attack women, it’s because I have seen so many instances in movies and the news where black or latino or “urban” men are a threatening force, or even just props to depict a threatening atmosphere, that it’s become ingrained into my mental framework of what is a threat.

As I said before, I truly believe that most law enforcement officers want to help people.  I don’t believe that most law enforcement officers hold any malice toward people of a particular race.  But law enforcement officers, like all of us, are fallibly human, and it is next to impossible to discern which of our “instincts” are based on reliable feedback, and which are based on media and societal stereotypes. Young black males (ages 15 to 19) are 21 times more likely to be shot dead by police officers than young white males of the same age.  If you think black teenagers are just 21 times more likely to deserve it, consider that black people are 4 times more likely to be arrested for marijuana use than whites, despite the fact that blacks and whites use marijuana at similar rates; consider that black men are likely to receive sentences 20% longer on average than white men for similar crimes. With statistics like these, until we eliminate all unnecessary police use of force and all inconsistencies in the justice system, there is no way to eliminate race from the discussion, because #BlackLivesMatter .

If you are personally able to rise above all the racial stereotypes and don’t see a world colored by race, consider that a privilege.  I’d encourage you to browse #AliveWhileBlack on twitter to get a glimpse of what life can be like for those who are not afforded the same privilege by society.

Posted in: News, This I Believe , Tagged: #BlackLivesMatter, Eric Garner